Introducing Rendering And How To Use Rendering In JTS IntelliCAD

Introducing Rendering And How To Use Rendering In JTS IntelliCAD

Shades the surface of a model as though it were illuminated from multiple light sources, providing a quick way to realistically visualize your image.

An example of render on multiple entities 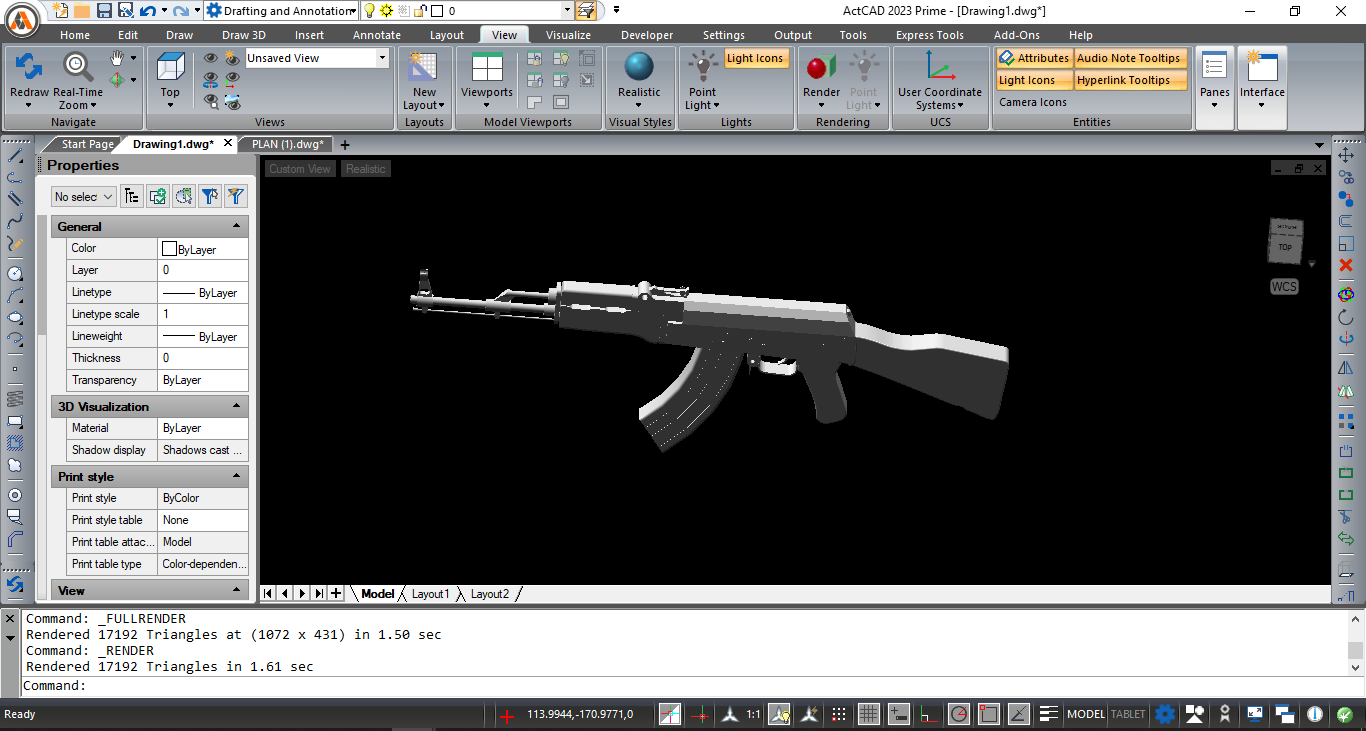 The Render command creates a more realistic image than using Visual Styles, because the use of light sources gives the image depth. However, Render creates an image that is less realistic than the Full Render command, because Full Render also calculates shadows and reflections; uses surface materials to calculate reflection, refraction, and transparency; and uses a background image.

Rendering automatically creates a base on which your model is displayed, if you dont already have one, so it does not appear suspended in space.

Creates a photo-realistic image of your model, complete with light sources, shadows, surface material properties, and reflections. You can illuminate your image with spotlights, distant lighting to simulate sunshine, and ambient light. If you choose not to customize the light sources, the program generates default light sources for you (one main light from the left side with a small filler light from the right).

Defines the settings used to render images, such as smoothing and double-sided objects.

Low — Rendering is calculated without shadows, reflections, or transparency.

Medium — Rendering is calculated without shadows.

High — Rendering is calculated with approximate shadows using Adaptive Shadow Testing. This accelerates the rendering significantly when rendering scenes with multiple lights, but some artifacts and inaccuracies in the shadows may result.

Presentation — Rendering is calculated with detailed shadows, reflections, and transparency.

Number of Samples Enter the number of samples to use for antialiasing (available only if antialiasing is turned on).

Output Select where you want to output rendered images when using the Render or Full Render command:

Render to Viewport — Rendering is performed in the current viewport.

Render to File — Rendering is saved to a file automatically when using the Render or Full Render command.

File Displays the location and name of the file in which you want to save the rendered image when using the Render or Full Render command (this option is available only if Render to File is selected for Output). Click [...] to select the file and location of the rendered image. Images can be saved in BMP, JPEG, TIFF, TGA, or PNG format. The saved image will be in 24-bit, full-color format at the same resolution as rendered on the screen.

Image Output Size in Pixels Enter the width and height pixel size of the rendered image to be saved (available only if Render to File is selected for Output). There are no preset limits on the width and height dimensions, however, the larger they are the longer the process will take and the more memory will be required.

Redisplay Last Rendered Image Click to display the image that was last rendered. After the image displays, it will be erased if you interact with the drawing or perform a redraw or regen of the drawing.

Save Last Render to File Click to save the image that was last rendered to a file, then specify a filename and location for the rendered image. Images can be saved in BMP, JPEG, TIFF, TGA, or PNG format. The saved image will be in 24-bit, full-color format at the same resolution as rendered on the screen. If necessary, press Esc to cancel rendering after it has begun. 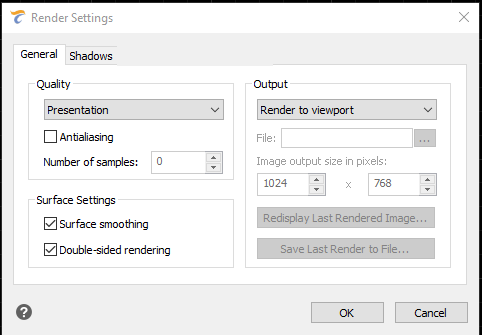 Number of Shadow Samples per Light Select the quality of soft shadow computations. Soft shadows from area lights, that is, lights that have some non-zero diameter, are calculated by taking multiple samples of the light at each point in the image. The higher the number, the more accurate the lighting calculations will be, but the longer the rendering process will take.

Number of Ray Reflections Enter the number of light reflections or transmissions the renderer considers during shadow depth calculations. If the rendered image contains several mirrored surfaces that face each other, the renderer could spend a considerable amount of time bouncing rays of light back and forth between the mirrored surfaces. The shadow depth option controls this by only allowing the renderer to consider a specified number of "bounces." Each time a light ray hits a surface and reflects off of it, or travels through it if the surface is transparent, the "depth" of the ray is increased.

Adaptive Shadow Samples Slide the bar to the desired number of samples used for adaptive shadow testing. Adaptive shadowing is an algorithm used to speed up the rendering process when rendering images that have multiple light sources. This algorithm identifies which light sources are most significant for each part of the scene and only directly samples those lights. The light cast by less significant light sources is estimated based on statistical techniques.

If the slider is set to 0, all of the light sources will be tested and shadows will be calculated exactly. If the slider is set to 1, only the strongest light source at each pixel will be tested and the contributions for other lights will be estimated. The higher the value, the quicker the rendering but the more approximate the lighting calculations. Adaptive shadowing is only used when Rendering Quality is set to High Quality or Very High Quality on the General tab. 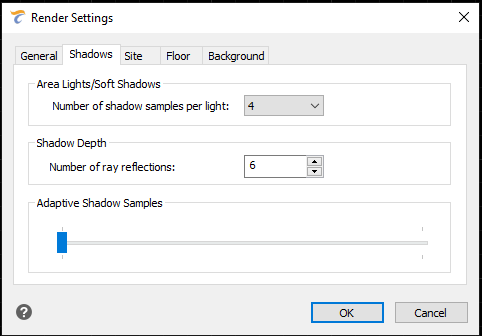 Nearest Major City If your building site is in or near a major city, select it from the list to automatically make selections for Latitude, Longitude, and Time Zone.

Latitude Enter the degrees of latitude for the site location.

Longitude Enter the degrees of longitude for the site location.

Time Zone Select the time zone of the site location.

North Enter the the site orientation relative to true north or click the degrees in the compass. 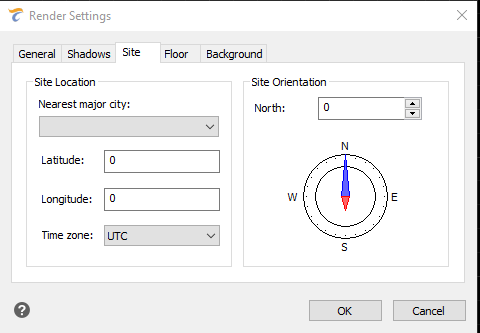 Automatically Generate Rendered Floor Surface Select to display a floor when rendering. If no material was previously selected for the floor, the Floor Properties dialog box displays.

Material Displays the name of the material to use as the floor.

Edit Click to select a material to use as a floor. The Floor Properties dialog box displays.

Elevation Enter the elevation of the floor. By default, the floor is drawn in the x,y plane touching the lowest point (smallest z-value) on the drawing. The z-direction is assumed to be "up". 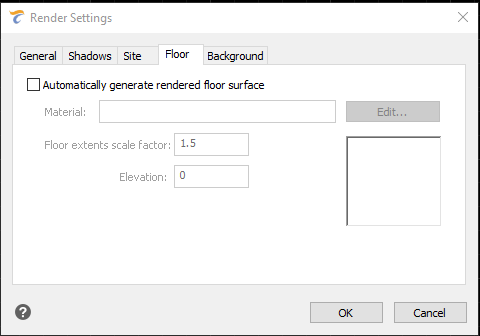 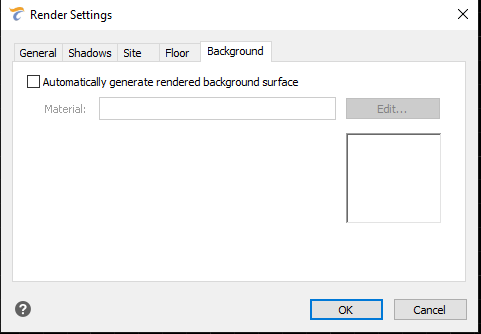